Highgate School have ambitious development plans and last month Haringey held an online Development Management Forum at which the school, its architects and planning consultants presented details of developments proposed in phases over the next 10 years.

Development Management Forums are now a normal procedure for presenting major proposals to the community after the applicant and the local authority have gone through the pre-application process. All the design and policy elements are resolved at Pre App stage, leading to the planning application often being a rubber stamping exercise. Transport, conservation, urban design etc. are all now consulted at Pre App just leaving the statutory public consultation for planning.

Since the 2018 versions of the designs and plans there has been little public consultation, though there have been extensive discussions with Haringey planners. The school and their planning consultants are following a similar approach to that now seen for other major developments in Haringey and in other boroughs with the proposals being worked up by the client’s planning consultant and architect behind closed doors in consultation with the local authority planners. This leaves the community at a huge disadvantage in having any meaningful input.

Five separate development schemes plus some temporary classrooms are planned and are described on the school website at https://www.highgateschool.org.uk/buildingprojects/ Some highlights are discussed below. These are expected to be submitted as planning applications in the next month or so. The proposals follow on from the 2018 proposals. We’ve set out below our preliminary thoughts and will be responding to the planning applications in due course.

The main structure of Dyne House gains a new front elevation treatment. However, the building is still too tall in the context of other buildings nearby and the lift shaft remains unpleasantly prominent. It still sits awkwardly out of the line of the road and other buildings on Southwood Lane.

The existing building frame is being kept probably for three reasons, (i) it is cheaper, (ii) the school would probably not get consent for anything so high if it were demolished, and (iii) refurbishment has a lower carbon footprint than new build. Demolition would also be more disruptive for the neighbours.

Old plans show that whilst the main body of the previous building on the site before Dyne House was angled to the street, it clearly had a wing or porch and front wall which maintained the pavement line. We wonder if there might be scope to continue the three storey height of the neighbouring houses across the front of Dyne House following the pavement line so that the angled block would be less visible from the street and the additional floor area could be used to reduce the density at the rear. If that was done the lift shaft would also be less evident but others might feel this idea is not for them. If there is no redesign at the front, we hope that the space at the front can used for gardens which could be open to the public.

The most significant changes are at the rear. Neighbours near Dyne House will be concerned about possible overlooking of their houses and gardens and there is a risk of the green roof becoming an informal roof terrace. Possible noise pollution will need to be considered over a wider area as noise pollution is hard to contain and the Highgate Bowl area can create unexpected acoustic outcomes. There will also obviously be a lot of construction noise.

We generally welcome the proposals except for the impact of the rear extension to the Science Block on daylighting, sunlight and overlooking to the last almshouse and its garden. Studies must be undertaken to prove there is no impact or a redesign needs to be done to remove or lessen the impact. The new rear extension will be visible from the public realm, but we thought it an acceptable modern design.

In Bishopswood Road the Richards Music Centre remains in our view disappointing and reminiscent of the swooping elongated design of a car showroom. It is not up to the standard expected from a well known architectural practice such as Hopkins Architects. The existing building may well not be suitable for modern needs but has a much more timeless quality.

The three images below show the proposed design, the existing building and a much better building recently completed by the same architectural practice. 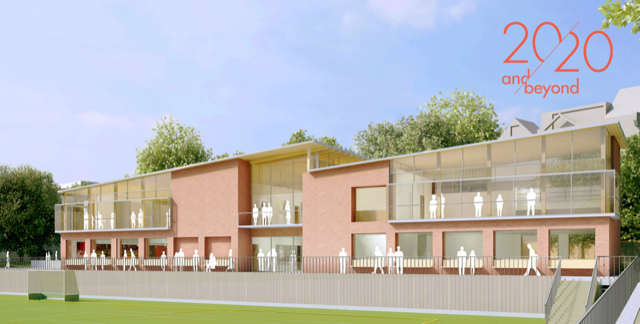 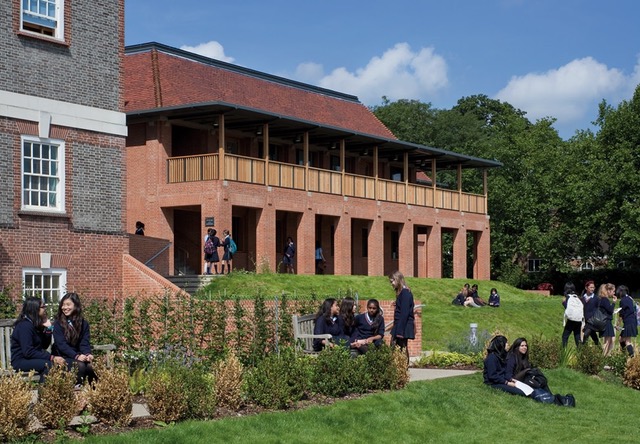 Another and in our view much better design by Hopkins. Mallinson Sports Centre

Also in Bishopswood Road there are plans to improve the existing Mallinson Sports Centre, building onto it a new facade with additional facilities. The revised north elevation now has a two storey block of classrooms well beyond the building line on Broadlands Road. This is hardly mentioned as a revision and is certainly not in response to any criticism made, it appears to be a further addition to what is already an overdeveloped site. The windows on this elevation have a slightly horizontal proportion which is at odds with the vertical proportions found on all the other buildings in this part of the Conservation Area. It is good to see the solar panels proposed on the roof.

Behind the Mallinson there is a sunken playing field proposed. We need to understand how this proposal for a balancing pound to counter flooding will actually work and what effect it will have on the ancient oaks in the woodland nearby.

There will be a decade or more of disruption for Highgate residents while construction takes place. Residents will obviously suffer from noise. In return for this disruption we believe it will be important for Haringey to insist on mitigating and compensating arrangements for the local Highgate community to cover aspects such as:

– improvements to pedestrian safety in Hampstead Lane including traffic calming. The pavements are too narrow and traffic too fast, particularly on the section between Bishopswood Road and the Gatehouse. The junction of Hampstead Lane with the Grove also needs a rethink.

Highgate Society @highgatesociety
Saturday saw the second and last collections of warm clothes for Ukraine . Thanks to our able volunteers, everythin… https://t.co/O7PMX9VYFZ
replyretweetfavorite

Highgate Society @highgatesociety
Concert coming up tomorrow! It's not too late to book your ticket(s)! https://t.co/MLX7EqV1Xs
replyretweetfavorite

Highgate Society @highgatesociety
This Sunday at 1pm Do book at ticket .... https://t.co/MLX7EqVzN0
replyretweetfavorite

Highgate Society @highgatesociety
Great Highgate Society tidy up event in Queens Wood this morning. We even found a way to recycle the Christmas wrea… https://t.co/VHW7Yz9pDi
replyretweetfavorite

Highgate Society @highgatesociety
RT @highgatesociety:Wednesday 11th January 2023 7.30 pm 10A South Grove and on Zoom Entry £5 to include a glass of wine (£3 on Zoom) https://t.co/XKc5jfTC62
replyretweetfavorite